So it’s time for an update. I’ve been in Paris now for four days, and I am starting to really enjoy it. In fact, I have been mistaken for a Parisian six times in the last 48 hours!

Firstly, I’d like to say that I have enjoyed my journeying in France thus far, but travelling alone is very different.
Pros – You get to do what you want to do when you want to do it. If I choose to wake up at 9.30am and take my sweet time getting ready and out the door, there is no one to tell me that I’m wasting my day away. Likewise I can spend what I want, eat what I want, when I want, and feel no guilt (except what I put on myself, and I can always justify that away). When I decide that today experiencing Paris means reading a book for three hours in Jardins des Tuileries, then I can enjoy it!

Cons – There is no one around to say ‘oh my gosh, did you see that!’, or ‘that’s brilliant, do you want to do that with me?’. Sharing the moment is a little hard. Also, there is no one around to take a photo of you jumping in front of the Arc de Triomphe, or go with you to take night shots of the Eiffel tower all lit up (which I haven’t done yet, because it’s not the same by yourself). Hassling other people is an option, but I’m scared of handing someone my camera and having them run away with it.

Today though, I think is the first time that I’ve had a truly wonderful French experience. I’ve done some day tours (if you want an amazing free walking tour check out Sandemans New Europe Tours) and museums the last few days, and then trundled back to where I am staying to make myself an awesome fresh baguette from the local boulangerie, with deliciously creamy camembert (so cheap!), tomato and olive tapenade, accompanied by a glass of Merlot.

This morning I woke up late (around 9.30am), pottered around slowly, taking my time to shower, get ready, check facebook, answer emails etc. Then I took the metro to Jardins des Tuileries (the gardens of the Louvre) and bought a takeaway breakfast/lunch (coffee, mozzarella and tomato panini, and a pain au chocolat), enjoying the little bits of sun shining through and reading a book for a few hours. Then I went to the Louvre itself to join a small group tour (five people, run by the Arnaud at Babylon Tours) which was a fantastic entertaining few hours. I highly recommend using Arnaud for any private or small group tours around Paris. He definitely earned more than I paid in just the answers to my questions!

I decided to walk to the Latin Quarter (which was a bit of an effort considering my right foot has decided to hate me for walking on a lot of uneven cobblestones and footpaths for the last few days… I think I might have strained something somewhere) and find some dinner. After making it through Saint-Germain-des-Prés without getting lost, I turned down a little side street, then up another one and stumbled across a fondue restaurant called Heurex Comme Alexandre. I’ve never tried fondue before, and thought ‘what the hell… I’m in Paris!’

I turned up and a beautiful french man bounjoured me. I asked if they could do ‘fondue fromage végétarienne’ and he said ‘oui oui!’. Actually he didn’t say that exactly, but he did say yes. Then the owner Alex (of Alexandre fame) came out and he spoke brilliant English. Such a lovely man. They bought me a complimentary apértif , then a salad, then the bread, the potatotes, the fondue… I had a glass of wine, then another one, and basically I’m blaming Alex for the fourth glass. Also for the chocolat tarte he made me have. I’m not even joking, he said ‘come on, have it for me’. So I did. Also for me though, let’s be honest.

Across the road from where I was eating, drinking, smoking, and reading in the restaurant, there is a little second hand bookshop that has a Canadian flag hanging above it. About half way through my meal there was a group of people that sat at tables outside it and started playing guitar and singing! I was totally moved by their Coldplay and Beatles renditions, and eventually almost three hours later, after an amazing gastronomical experience, I tipsily made my way down to the metro to catch the train back. To complete my perfect typical French night there was of course a man playing a piano accordion when I got in the carriage. Happily I toe-tapped my way back to my station and eventually got home (after entering the wrong apartment complex, mixing up 30 and 32 in my slightly sozzled state).

Before today I was thinking that maybe Paris was just another slightly-charming city that smelled slightly like Vietnam if you stepped up the wrong lane way. But after tonight I have to admit that I have once again been won over to the city of love.

Here is some supporting evidence:

The best outfit on a street performer that stands still for a living that I’ve seen yet! 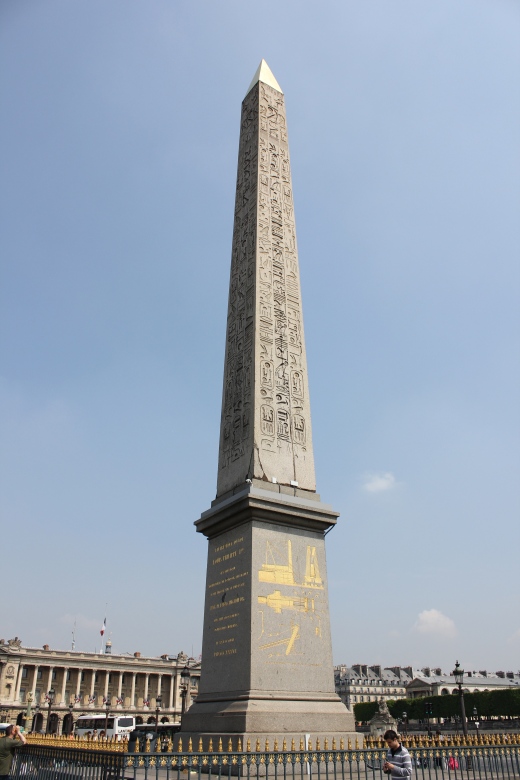 Ever wanted to know how to put up an obelisk? The instructions are in gold on the side. 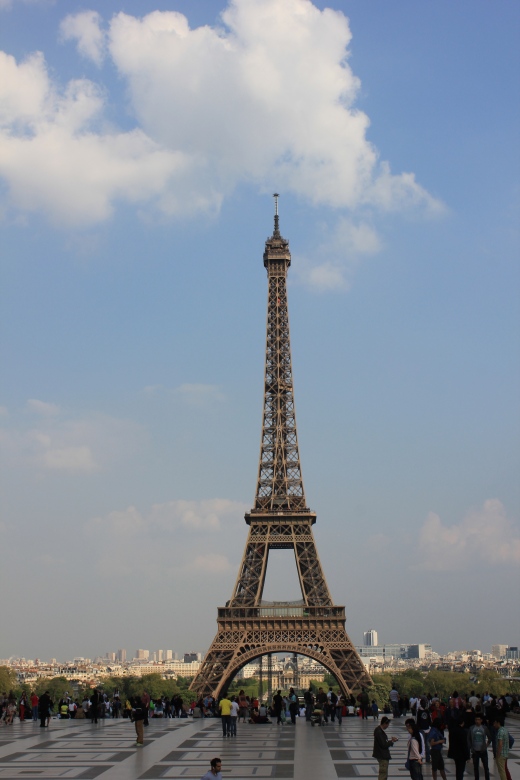 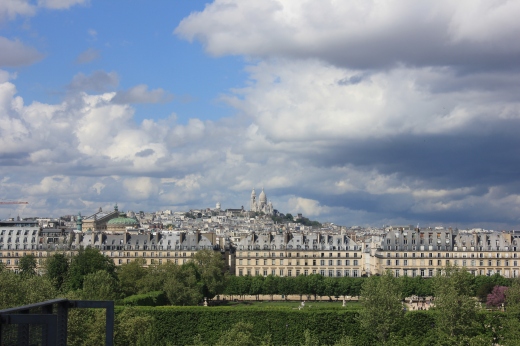 Looking out of another window at the Musée d’Orsay (not just great for Impressionist art, but also amazing views!) for the view over Paris, with the Sacré Coeur right at the top of the hill.

Me and the pink sphinx hanging. Better than the pink panther I reckon. At least he’s not a cartoon.

Galerie d’Apollon (Gallery of the Sun King) commissioned by Louis the 14th who loved Apollo and basically wanted to be him.

See the Mona Lisa in the distance over there? Yeah, I didn’t bother. Did you know that the Mona Lisa only got really famous just over 100 years ago because it was stolen by an Italian cleaner (wanting to return it to his home country and make some money), and then when it resurfaced it suddenly had all this extra security and it was in all the newspapers and was this massive thing. It actually took them TWO WHOLE DAYS to realise it was missing from the Louvre. That’s why it’s famous. Not even DaVinci’s best work.

Doing a worrying impression of ‘The Young Martyr’ by Paul Delaroche – my favourite painting here (I bought a print of it seven years ago when I was here last!) 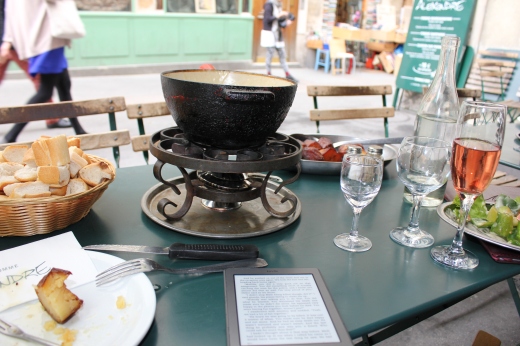